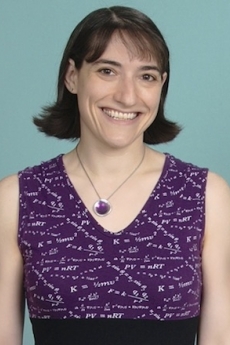 Dr. Bethany Cobb Kung is an astronomer who received her Ph.D. at Yale University in 2008 for research on massive stellar explosions called gamma-ray bursts. From 2008 - 2010 she did research at the University of California, Berkeley as a National Science Foundation Astronomy & Astrophysics Postdoctoral Fellow. She is currently an Associate Professor in Honors and Physics at the George Washington University, where she received the 2016 Morton A. Bender Teaching Award. She has worked to improve teaching at GW as a member of the University Teaching and Learning Center Faculty Advisory and Support Team, the Teaching and Learning Collaborative's Committee on Rigorous Evaluation of Teaching, and the Academy of Distinguished Teachers -- and as a facilitator at the 2016, 2017 & 2018 GW Course Design Institutes. She is a profound science-fiction geek who enjoys sharing her love of astronomy with anyone who will listen!

Gamma-ray bursts (GRBs) are the most powerful explosions in the universe, each one likely signaling the formation of a new black hole in a distant galaxy. Dr. Kung's scholarly work is related to observing these events as they occur at optical/infrared wavelengths in order to better understand both the nature of GRB progenitors and the mechanisms by which they occur. Using two telescopes in Chile -- a 1.3m telescope at the Cerro Tololo Inter-American Observatory (CTIO) and the 8m Gemini-South telescope on Cerro Pachon -- she discovered a supernova (SN 2009nz) associated with a GRB that occurred on November 27, 2009. Excitingly, in August of 2017, the first electromagnetic counterpart to a gravitational wave source was detected in association with a GRB (note this is only about two year after gravitational waves themselves were first directly detected!). This event was produced by the merger of two binary neutron stars and provided insight into how certain heavy metals in the universe (such as gold) are formed. Dr. Kung was involved in observing this event in optical/IR using the 1.3m SMARTS telescope at CTIO. She also engages in the scholarship of teaching and learning and is currently investigating how using Citizen Science in the classroom can affect students' attitudes toward and understanding of science.